In May 2017, the UK reached a significant milestone when the total number of plug-in vehicles registered since 2012 reached over 100,000. That's almost a 3000% increase over the last 4 years.

The popularity of electric vehicles is rising and it’s rising fast. In 2016 there were two million electric cars registered globally, with China, the US and Europe accounting for 90% of EV sales.

Plug-in Vehicle Adoption in the UK

Since 2011 registrations of plug-in vehicle have increased rapidly. 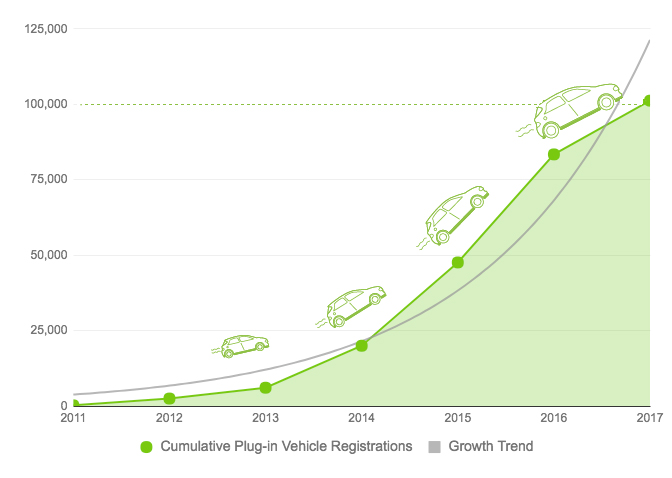 Why is the industry growing so fast?

There are several factors that are causing demand for EVs to increase so rapidly. They include:

Initially, EV’s cost a lot more than an internal combustion engine vehicle. However, driven by a decrease in battery cost in recent years, they have become much more affordable and UBS forecasts that the “total cost of consumer ownership can reach parity with combustion engines from 2018”.

With climate change being taken seriously (by most world leaders anyway), governments are backing EVs with huge financial and regulatory incentives.

The UK government has put electric battery development at the heart of its industrial strategy, promising to inject £300m to boost research and development in the field.

There are now over 40 types of EV’s to choose from and the majority of automotive manufacturers have made commitments to increase their range of plug-in vehicles.

To put this into perspective, Volkswagen’s CEO said in June 2017 that they’ll deliver more than 30 electric plug-in models by 2025 while BMW are targeting production of 100,000 electric cars a year.

Range in EV’s has been one of the fundamental factors preventing mass adoption but we are now seeing cars on the road like the Tesla Model S that can travel up to 400 miles on a single charge.

Audi, Chevy, Tesla, Porsche, Nissan and Volvo are all set to release models with 200 miles range or more over the next two years.

One of the main barriers to adoption has been a lack of public charging infrastructure and while the UK needs more, that’s changing quickly.

What does the 2022 Autumn Statement mean for EV drivers?

Recharging in nature with BMW UK