EV’s are building momentum as adoption rates continue to rise exponentially around the world.

Each day, progress is made to overcome these obstacles and these 3 barriers become more of a misconception in the public’s mind. Yet, there is much work to be done to change the public perception of electric vehicles.

For the next few month's we’ll be following an epic journey of a couple who are set to break the 3 key misconceptions about EVs.

Chris Ramsey and his wife are partaking in The Mongol Rally 2017 which kicked off a few weeks ago on July 16th. This race covers 10,000 miles across mountains and deserts of Europe and Asia. There’s no backup, no support, and no set route. There aren’t many rules apart from: “cars must be small, with a 1-litre engine or less and entrants must raise at least £1000 for charity”.

Chris and Julie started the journey from their hometown in Aberdeen to begin the race at Goodwood in the UK. Each year the race usually finishes in Kazakhstan, but this year the contestants will be racing all the way to Siberia.

Did we forget to mention that Chris will be driving an all-electric Nissan Leaf?

But not just your regular Nissan Leaf. Nissan has specially modified a standard 30kWh Leaf, making it an AT-EV (All Terrain Electric Vehicle).

The modifications include off-road tires, underbody protection plates to protect the battery, suspension, brakes, and have even reduced the weight of the vehicle. These have all been added to enable Chris to be able to drive through the remote parts of the world.

However, there has been no modification whatsoever to the 30kWh battery.

So, who is Chris Ramsey? 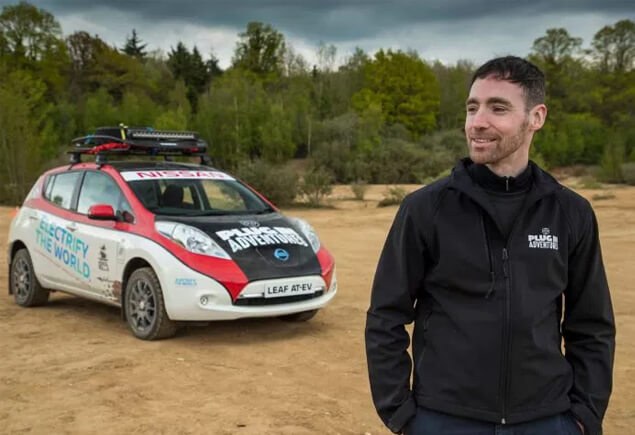 Chris Ramsey currently works in the Oil and Gas industry as a manufacturing supervisor, which as strange as it may sound led him to his passion for EVs. Chris is now the co-founder of Plug In Adventures and sees himself as an “EV adventurer”. He’s now got a Plug In team full of EV enthusiasts who enjoy pushing their EVs to the limit.

Nissan interviewed Chris before he left saying “[He’ll] be letting people know where we’ll be the day before and reaching out to the general public on Facebook, asking people for a charge. Already the response from the public has been incredible, with people from Kazakhstan saying ‘hey, charge in my garage!’.”

Plug In Adventures have not only managed to raise money for charity, they’ve been sought after by senior officials and government dignitaries from Kazakhstan and countries from all over the world to talk about “EVs, charging infrastructure and the importance of climate change initiatives”.