We spoke to an EV driver about her transition to an EV. Sarah bought a used Renault Zoe last year and hasn’t looked back since. If you're concerned about making the switch, read her story.

Here's what Sarah Jane Hurn has to say...

What EV did you buy?

What influenced you to buy an electric car?

My parents shocked me four years ago when they came home with a BMW i3 out of the blue. I had never even heard them talk about electric cars and as a family, none of us had even given EVs a second look. But, from the moment I went for a ride in their car I knew I wanted one my self. It just felt right... If that makes sense.

Plus, the way rising fuel prices were going I could no longer afford to run my clunky old diesel. So as soon as I found a second hand Zoe I could afford on a PCP, I snatched it up and haven't had a moment of regret since. There was no way I could have afforded a new car, and after having a chat with real-world EV drivers I realised my fears about battery degradation and potential age-related faults were unfounded.

A five-year-old car is just as reliable as a brand new one. Especially when purchased through the manufacturer at a dealership.

Where did you buy your second-hand EV from?

I purchased my car from an amazing dealership in Morecambe Bay. My parents introduced me to the owner after they met him during the delivery of their brand new Kona last year. He designed a super affordable PCP at low interest which meant I could easily afford the switch to electric.

How much did it cost?

I pay £113 a month for my car and the total cost will be just over £5k (including the interest). There will be a £1000 payment at the end if I decide I want to keep the car but I can give it back at any time with no questions asked. It was perfect for me when I started because if the car didn't suit my lifestyle I could just cancel the purchase with no hassle or fees. But I ended up loving it and will probably keep it for many years to come. 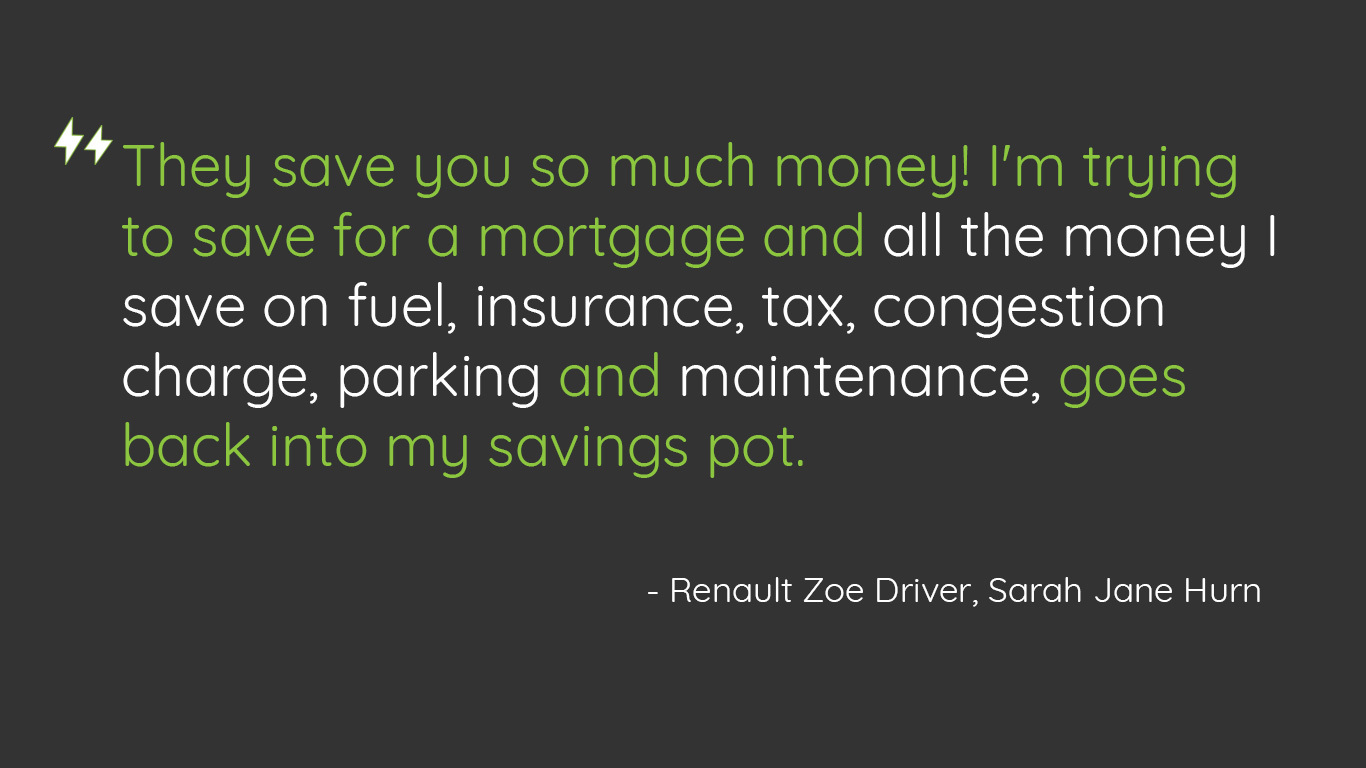 What’s the best thing about driving an EV?

1) They save you so much money. I'm trying to save for a mortgage and all the money I save on fuel, insurance, tax, congestion charge, parking and maintenance, goes back into my savings pot.

2) They are super nippy and a lot of fun. I love flying off the lights and leaving the occasional race boy in the dust. Don't get me wrong I don't break the speed limit so if they choose to speed they can catch up but in my mind, I won and get to have some fun. EVs can be so much fun to drive. They stick like glue thanks to the big heavy battery so flying around the country lanes on the way to work gives me enough of a boost to make it through the workday.

3) I sincerely believe these cars are amazing. My car is powered by sunlight... How are more people not super impressed by that? I can travel from my house in Nottingham to London and not feel guilty about the damage I'm causing to the environment. The grid is only at best 30% renewable for now but that is still better than the fumes and damage diesel engines cause. The more we understand how air pollution is killing people the more grateful I am for making the switch to electric.

How much real-world range will the car typically do on a single charge?

In the summer I can still get just over 100miles out of it if I drive nicely (which I only do on long journeys). The rest of the time I make short journeys from one county to another so I don't mind racing it and busting some more amps to have a nice drive. During the winter I get about 90miles. But you get used to it and just adjust your style of driving or charging habits to compensate.

Have there been any challenges or drawbacks that you don’t think you would have encountered with a new EV?

I haven't had any problems with the car being used / second hand as opposed to new. I think the fact that I got my car from a dealership meant I had an amazing support network behind me so I wasn't afraid something might go wrong. And even if it had I would have been covered and taken care of.

Lots of people still say that EVs depreciate more rapidly than petrol or diesel cars, and that this is a barrier to mass adoption. Do you have any views on this?

Because the EV market is so new it is kind of all over the place at the moment. Values seem to be unpredictable. For example, my car must have cost £15k new and I paid a third of that four years later. But, since I bought the car, the value is back up to about £8k. It all depends on popularity and availability.

My parents bought a Kona and it is now worth £5-7k more than what they paid for it because everyone wants to get their hands on it.

I would just advise doing some research and asking in EV groups what they think of current and past EV prices. They will have eyes on the trend and can probably help you predict when to get one at its best price. For example, right now a second hand Zoe is quite expensive and same for a Nissan Leaf. But, once the market becomes more saturated and the new models come out, the price of the older cars will go down. As long as the old cars have been looked after you don't really have to worry about battery degradation or maintenance issues. The cars really are just that good.

What would you say to other drivers considering buying a used EV?

I always say the same thing. Work out what style of driver you are and what you actually need. The number of people that tell me "I won't buy one till the range is the same as a full tank of fuel" amazes me! How often do you use a full tank in one drive? Because I'm guessing it's not often.

Work out what your average driving is like and look at EVs that suit that. Trust me. You can charge easily enough on the longer rare trips. You’ll learn how to get the best of your EV I promise.

It's such a shame that people get stuck in this "I must have the biggest range car possible" mentality when they only drive to the shops and work. You’ll end up paying a lot more for a car that’s being wasted on you.

If you have concerns about electric cars, just ask. We’re all super happy to talk about our cars. There are plenty of Facebook groups for EV drivers in each area and for each manufacturer, so you can chat to real EV drivers and ask them how they handled the change.

When I talk to non-EV drivers they always have the same misconceptions that they picked up from media. However, once you explain your journey with your EV their worries fade away and they soon become excited and want to try it out themselves.

If you are thinking of making the change, we are all here for you. The community surrounding EVs is amazing, supportive and open. So feel free to come and ask us anything you like.

Learn More about Charging an EV