Cheaper Batteries: EVs could be the next Beatles

In light of the latest Bloomberg report on the continuing reduction in the cost of batteries, James McKemey - Head of our Insights Team, takes a look at why this matters:

Anyone who knows me knows I’m fond of an EV, both my own and as a general entity. EVs rock.

In fact, I no longer consider anything that isn’t a full battery electric to be a proper car. Kind of like front-wheel drive sports cars from yesteryear, anything wasting its time (efficiency) with petrol just isn’t… proper.

Bugatti Veyron? Meh. I’d rather have the real thing. Something actually quick...

Close up video of Tesla Roadster launching from zero pic.twitter.com/6FziM9M755

But, I hear you ask, what is the thing that most excites me about EVs? The ruthless energy efficiency? The fundamentally superior and (at the top end) organ squishingly brutal performance? The flexibility of the platform, allowing incredible technical innovation? The effortlessly convenient ownership experience? The tremendous handling - a product of their low centre of gravity and even weight distribution? The huge impact their uptake will have on air quality? Pre-heating on cold days? The ability to power them with renewables, even homegrown renewables, and the resultant CO2 reductions?

Good guesses, but nope. The thing that most excites me about EVs is the global trend regarding the price of batteries. Yes, really.

How EVs could be bigger than The Beatles?

The one thing keeping the EV from going mainstream (or mass adoption, as we call it) is the headline cost of them. (Yes, charging infrastructure needs to scale and solve a few challenges to go to circa 100% adoption, but now that range is arguably solved, price is the key remaining barrier).

Norway, through the medium of pretty extraordinary tax disincentives (of ICE cars), has proven what can be achieved if EVs are as cheap as ICE vehicles, i.e. circa 50% adoption to date. So if we can get them cheap, they really will take over.

But, we can’t do the Norway tax thing… So how does the EV industry tackle the price issue?

EVs are much simpler machines than hybrids or ICEs. There are far fewer moving parts in the drivetrain, so they should be cheaper to build. And they are, but for one issue - the battery. Tackle the battery costs and you’ve tackled the price issue. In fact, tackle the price of batteries and we could make EVs cheaper than ICE vehicles.

Great, any progress being made on that front?

Well, it turns out we’re making lots of progress. Far more progress than ever seemed likely back in those innocent days of early 2011 (when I first joined this industry and people thought diesel engines were a good idea). This progress is broadly caused by a dramatic increase in the production of batteries and the accompanying economies of scale. You’ll probably have heard of Tesla’s Gigafactory, but the likes of LG Chem and Samsung are also putting a huge investment into production.

To put some numbers to it, according to the McKinsey and Co Report referenced in this Electrek article, in 2010 it cost basically $1,000/kWh to make a lithium-ion battery for an EV. By end of 2016, it had declined to $227. A stunning 77% cost reduction.

This week Bloomberg followed up saying the price had declined in just the past 12 months by a huge 24% to $209/kWh. And, that the figure will be below $100/kWh “by 2025”. In truth, those numbers seem a little conservative, as the rate of cost reduction will have to slow dramatically for it to take that long. However, it’s likely Bloomberg’s analysts are hedging somewhat, in case material costs go through a (short term) spike.

On the other hand, others are more optimistic, Audi’s CTO claimed in April that they’re buying batteries at a cell price of $114/kWh. These will eventually power their (hugely exciting) “e-Tron” range of full battery electric vehicles, set to be released in 2019. Additionally, some claim Tesla may already be at $124/kWh at pack price. Putting these claims into consideration, it seems fair to say that there’s a very real chance that the pack cost will be <$100/kWh by 2020.

To give some context to that rate of decline: in 2012 Wood McKenzie issued a report that outlined its overview of industry projections for the decline in battery production costs. The report gave its most likely scenario, averaging out experts price projections, along with a highly optimistic ‘very best case possible scenario’. We’re now more than a decade ahead of this best case possible scenario, just 5 years later. Staggering.

The net result of all of this is that in some point in the early 2020s it will be cheaper to buy the EV over the equivalent ICE car. To buy.

We’ve already reached total cost of ownership parity, but once the price of entry is lower too, there will be absolutely no reason to buy a petrol car - it will be worse on every conceivable metric. What happens then? Well, something like this: 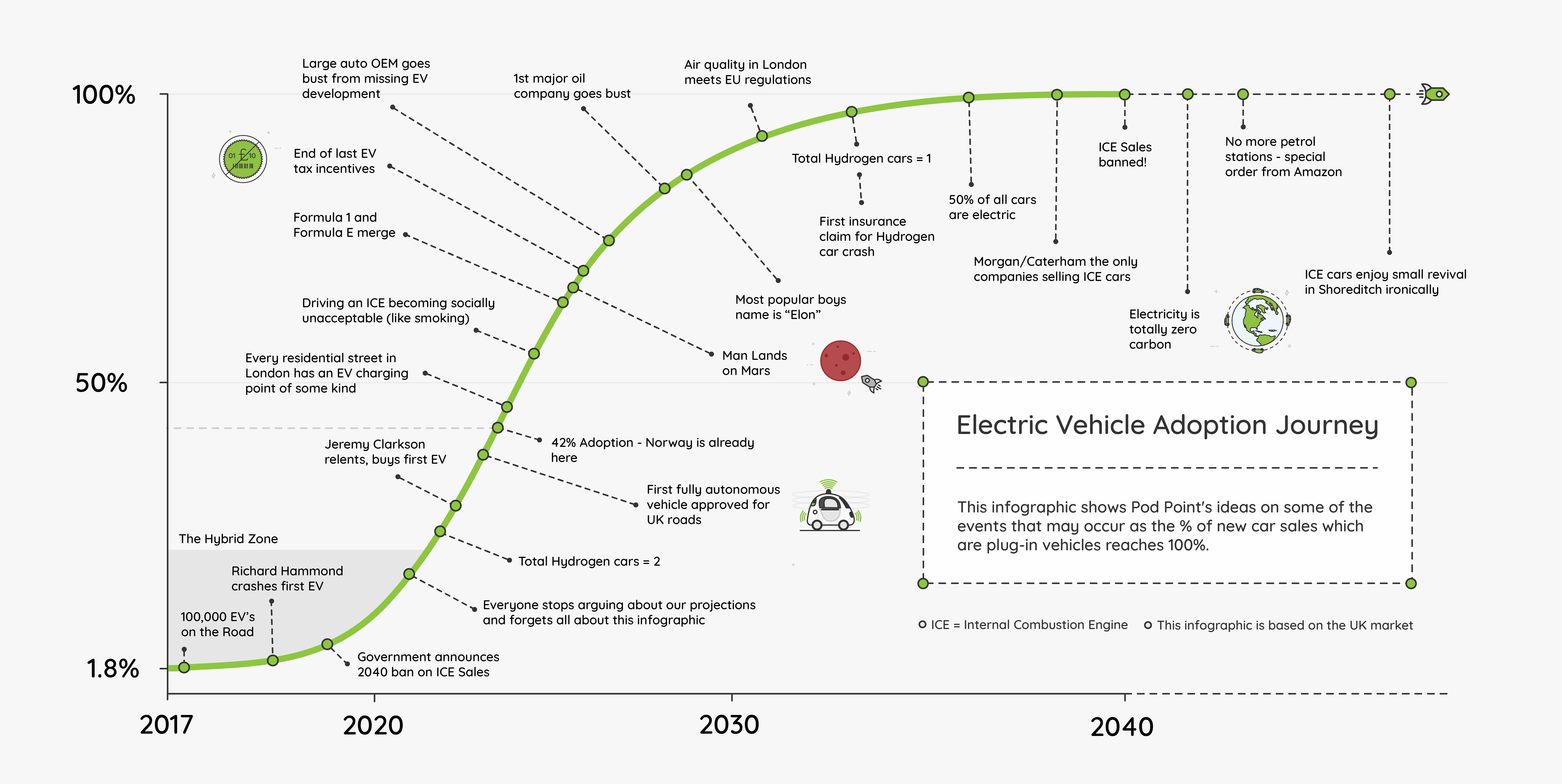 Even the stationary batteries are rapidly advancing

The eagle eyed will note that lithium ion batteries are becoming increasingly viable as a means of storing energy for general use, as well as for powering EVs. With that said, could these price falls have an impact on the energy industry too? Oh yes.

But perhaps that’s another article for another day...

What does the 2022 Autumn Statement mean for EV drivers?

Recharging in nature with BMW UK